Almost half the Africans forced to this country in chains first touched its shores at Sullivan’s Island, South Carolina. A historical marker planted on that quiet spot of coast pays tribute to the courage and resilience of those uprooted generations and their many descendants. It was our first stop on a post-Christmas pilgrimage that Bill and I made to Charleston.

The second was Mother Emmanuel AME, an imposing church on a busy street in the heart of downtown. A gathering of flowers, wreaths, and prayers honoring the nine members murdered there during a Bible study in June 2015 stands next to the church’s marquee. It bears a message of thanks to the community for its many acts of kindness. 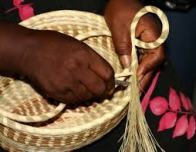 In the centuries between the terrors of slavery and last summer’s racial massacre, a transplanted African culture took root on the barrier islands of Georgia and South Carolina. In the mid-1980s, when I was a feature writer with Sojourners magazine, I visited Daufuskie Island to cover and offer support to a remnant Gullah community’s struggle against displacement. Still lingering among the live oaks draped with Spanish moss were the suspenseful trickster tales that had been passed down for generations, the “shouts” and ecstatic prayers that had echoed in praise houses all night long, and the lullabies of resistance sung to sleeping infants while maternal hands crafted baskets for rice from bulrushes and pine needles laced with strips of palmetto in the African way. But the ancient whispers were being drowned out by the constant bellow of bulldozers, destroying everything in sight to make way for golf courses and opulent resort “plantations.”

I thought about that struggle when Bill and I encountered Louise, creating a beautiful sweetgrass basket in her lap as she has for several decades, and her daughter Marcella, crafting elegant dolls out of palmetto and African fabric. When I told them about my Daufuskie visit years ago, Louise said, “We’re still hanging on. But our family is the only ones where we are. Development is all around. And they keep raising the taxes on us.” She sighed. “Pretty soon we won’t be able to pay them.”

I bought a doll, captured by its uniqueness and a desire to offer what little support Bill and I could. As Marcella put it into a paper bag, Louise reached out and slipped in a small palmetto cross she had woven. “A gift,” she said. I thanked her and told them, “I’m a minister.” Marcella smiled and said, “I knew there was something about you.”

Both her eyes and mine welled up with tears when I mentioned our stop at Mother Emmanuel. “That boy is a mother’s child,” Marcella said, referring to Dylann Roof, the perpetrator of the massacre. “And he’s God’s child,” she added. “I pray for the people who lost their lives, but I know where they are. We need to pray for the one who’s lost. You know he suffered terrible things to do what he did.” She paused and then said, “Jesus left the ninety-nine sheep to go after the one that was lost.”

In the aftermath of the massacre, I felt overwhelmed by so much anger that I had difficulty accepting such gracious generosity of spirit, which was then expressed by many members of Mother Emmanuel. But if they and Marcella can forgive the one who today faces the court trial that will determine whether he lives or dies, then perhaps I can, too.

How much better our nation and our world would be if we could all learn to extend such mercy to one another. We’re surrounded by people of courage and resilience who can show the way. I look forward to the day when we can together plant a historical marker declaring, “On this spot, hatred and racism and vengeance were banished forever.”