[First posted in September 2011 on www.deepeningcommunity.ca]

I had to serpentine my way around a row of massive concrete barricades yesterday morning to get to the prison that houses Georgia’s death row. Four days before, on September 21, this line of defense was upstaged by an army of prison guards, sheriff’s deputies, state troopers, and riot police wearing blackened face shields and bearing high-powered rifles. A helicopter hovered overhead, and throughout the evening, police cruisers roared past the crowd, their lights flashing and sirens blaring. In all my years, I’d never seen such a massive display of force. 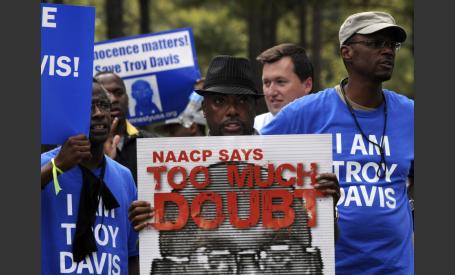 Just before 7 p.m., the scheduled hour of Troy Davis’s execution, the three hundred or so of us who had come to protest and pray outside the prison knelt and went silent. A bell rang the hour, and someone close to me began singing “Amazing Grace.” And then, at the other end of the line, a great cheer went up. A reprieve! Hope. It turned out to be only temporary.

Troy Davis was pronounced dead at 11:08 p.m. His last act on this earth was to ask for mercy for those who killed him. Moments later, the heavens opened up with a downpour of rain, a great, cosmic weeping for this gentle soul and a cleansing for all of us who are in need of showers of mercy.

The compelling doubt about Troy’s guilt had drawn together a community of support that included the pope, the Dalai Lama, a former U.S. president, and even conservative, pro-death-penalty members of Congress, along with hundreds of thousands of ordinary folk who signed petitions and organized protests.  Four hours before the execution, Troy’s greatest advocate, his sister Martina Correia, who has courageously faced cancer for a decade, struggled from her wheelchair to her feet, declaring, “I am standing today on behalf of my brother. I am Troy Davis.” Surrounding her was a sea of young people wearing T-shirts emblazoned with those words: “I am Troy Davis.”

Outside the prison that night, in the face of the tension and fear and overwhelming firepower, I understood the vulnerability that those young people feel. Our cruel world seems to have lost its compassion, its kindness, its moral center.

Yesterday morning, four days after the execution, I returned to the prison to see my friend Wiley, who has been on death row for 39 years. I’ve been visiting him for the last 15. He was like a father to Troy.

The despair seemed palpable in the tiny, concrete-block visiting room. Wiley told me that all the men on the row were feeling the same thing: “If Troy didn’t get justice, what hope is there for me?” He said the loss was going to “hurt for a long time.”

But then he shared something extraordinary. “The guards all know that Troy called me Papa, and I called him Junior,” Wiley said. They make rounds of the cellblocks every hour. And all that night and during the next day, they stopped at his cell and asked, “Are you doing all right?” wanting to know if he needed anything. This is not always the behavior of prison guards, and I give thanks for this small gesture of kindness, which deeply touched my friend Wiley.

A community was conjured around a person and a cause. Our greatest hope was not realized. But if Troy’s death can move people to kindness, he did not die in vain. If we can learn to embrace the grace, patience, compassion, and forgiveness that marked his life, then we are all Troy Davis.