[First posted in January 2011 on www.deepeningcommunity.ca]

I’m guessing that Circle of Mercy, the congregation I co-pastor, is the only church in existence with an annual prom in the dead of winter. The tradition came about like this. A few of us were talking after the worship service at one of our weekly potluck dinners about how we seem to be a “last-chance church” for a lot of people. We tend to attract folks wounded in one way or another by previous religious experiences.

Somebody piped up, “Well, I was wounded by my prom.” That launched a barrage of embarrassing stories about adolescent trauma in the high school gym. Someone suggested that we should have a Circle of Mercy prom, for laughs and healing. Everybody agreed that it would be good to have something other than Groundhog Day to look forward to in the bleak lull after the busy holiday season. 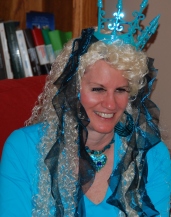 Last year’s theme was The Beach Ball. The children decorated with fake flowers and, of course, beach balls. The host family hung a disco ball on the ceiling that threw colorful shards of circling light everywhere. People showed up in tacky polyester suits, gaudy tropical shirts, and Goodwill gowns, some pinned with plastic corsages. Mark, our musician, arrived wearing half-tuxedo and half-wetsuit, carrying his surfboard.

It didn’t matter if you showed up with your children, a spouse, a partner, a date, or alone. It didn’t matter if you were 8 or 80, had Down syndrome or wore hearing aids, danced like Big Bird or one of The Three Stooges. Nobody was going to insist that you stand in the corner feeling bad about yourself.There was no coronation of the King and Queen of the Ball. Though let me say, ever so humbly, that my mermaid get-up—complete with sequined fishtail, diamond-studded fake eyelashes, plastic crown, and waist-length curly blond wig—won Grand Prize in the costume competition.

I arrived home very late the night of the prom with a smile that seemed permanent, thankful for the spontaneous joy of the event, which did indeed feel like a healing balm to many of the attendees. I stared for a while at the sparkly-glittery blue nail polish that an 8-year-old friend had insisted I wear and graciously applied. I had to awake very early the next morning for a trip to the maximum-security prison, to participate in the baptism of half a dozen inmates. It seemed best to remove the eye-catching nail polish. I finished the fingernails and then, too weary to continue, decided the toenails could wait.

What I hadn’t counted on was the foot-washing ritual that followed the baptism.

I sat in a plastic chair at the prison, a middle-aged woman pastor with sparkly-glittery blue toenails resting in a basin of warm water. A newly baptized inmate with a full-forearm tattoo that can only be described as pornographic (the words wench and buxom come to mind) gently smiled, washed my feet, and proclaimed, “God bless you.” It seemed pointless to try to explain the toenails and the prom to this young stranger. All I could do was smile back and receive the gift of connection, which had washed over me at the dance and then spilled over into a prison basin.