Ho, everyone who thirsts, come to the waters; and you that have no money, come, buy and eat! Come, buy wine and milk without money and without price. Why do you spend your money for that which is not bread, and your labor for that which does not satisfy?  –Isaiah 55:1-2

My honorary three-year-old grandson Isaac was showing me the amazing kid-sized kitchen that his grandfather, my friend Bill Wylie-Kellermann, had made for him for Christmas. I complimented Bill on giving him such a politically correct gift. He said, “You mean because of the gender thing?” And I said, “No, I mean this morning Isaac turned the little spigot knobs, peered up into the faucet, and asked, ‘Where’s the water?’”

You see, Isaac lives in Detroit. And more and more of his neighbors are having exactly this experience—turning on their faucets and having nothing come out. More than 38,000 households in the city have been denied access to safe, clean, and affordable water. 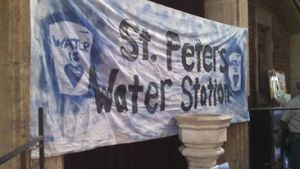 It works like this: The city raises water rates beyond the means of people already struggling to survive, and when they can’t pay, a crew from a privately contracted “demolition and environmental service” shuts off their water. Local and regional officials have maliciously charged that low-income customers insist on “free water”—and these same officials have recommended “behavior modification training” for them. In October 2014, a special delegation from the United Nations declared the massive water shut-offs an unprecedented human rights violation.

While I was in Detroit hanging out with Isaac and welcoming his newborn brother Cedar, a coalition of justice organizations convened a Water Crimes Tribunal. The tribunal brought charges against Michigan Governor Rick Snyder, Detroit Mayor Mike Duggan, and their accomplices. Their crimes include both the Detroit shut-offs and the now-infamous switch of the Flint water system to a river that poisoned city residents with bacteria and lead.

The Water Crimes Tribunal was one of the most creative acts of public liturgy that I’ve witnessed. The men playing the roles of defendants Governor Snyder and Mayor Duggan and their young defense attorney offered comic relief in their parodies of the authorities. In dramatic contrast, the witnesses offered heart-wrenching testimony about what they have suffered in Flint and Detroit.

One woman watched the closing of the local elementary school in her neighborhood, and then the removal of the public library. Now, water deprivation is the tactic being used to force people to leave, so that their neighborhood can be “rejuvenated” by profit-minded entrepreneurs. She told the tribunal that when she personally tried to stop the crew from shutting off water to her and her young children, the city retaliated by shutting off water to everyone on her block.

A lot of shouting and laughing, crying and cursing, went on among the large and diverse crowd in the room. The tribunal provided needed cathartic release for people who are sick and tired of being targeted and victimized.

The individuals chosen to be jurors were community leaders and activists who have launched a variety of advocacy and resistance efforts—including distributing drinking water and blocking the trucks that carry the shut-off crews. They were eloquent and to the point.

“Water is the source of all life, and those who withhold it are guilty of crimes against humanity,” said one.

“The defendants have poisoned not only our water, but our community relationships and the democratic process itself,” stated another.

“When the government is unable to safeguard and enact the will of the people, the people must take action.”

The verdict was unanimous: guilty on all counts. The jurors’ sentencing recommendations ranged from subjecting the authorities to the behavior modification training they tried to foist on Detroit residents to death by firing squad.

All eyes then turned to my friend Bill, who was chosen to play the role of the judge. I wondered how he would ever arrive at a sentence that would please the agitated and emotional crowd.

He spoke calmly. He acknowledged the legitimate anger in the room, the desire to “do to the chief executives what they have done to others”: slowly poison the mayor and the governor with heavy metals and bacteria, force them out of their homes. Or send them to prison. Or worse.

But Bill, a Methodist pastor appropriately cloaked in the authority of his ministerial robe, imposed this punishment. Looking at the defendants, he declared, “You are hereby stripped of your authority to lead. People are no longer bound to respect your authority. Go! You are no longer over us.”

The tribunal, like all of life, ultimately came down to a matter of loyalty. As we begin the journey of Lent, a good question to ask is, Where does our loyalty lie? With the empire’s greed, or with the radical generosity of the commonwealth of God? With profit, or with people? With the spirit of capitalism, or the Spirit of God? With bad politics, or good news? With the world’s revenge, or God’s mercy?