It was a rainbow more spectacularly breathtaking than any I had ever seen. Bill, our dogs Micah and Tasha, and I were taking our nightly twilight walk down our rural mountain road on Friday evening. Emblazoned over us was a complete arc of brilliantly vibrant color against a sky that glowed with electric pink and fuchsia.

We weren’t alone in our awe. At Circle of Mercy two nights later, I discovered that my seven-year-old friend Abby was riding in the car when she saw the rainbow and couldn’t take her eyes off it. “It seems like it’s following us home,” she said to her mother. “Is it solid enough to stand on?” 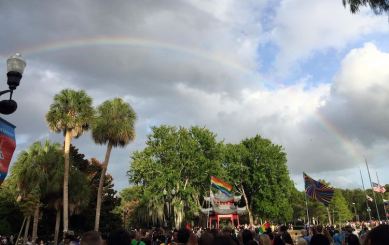 While I stared at it, transfixed, I recalled God’s words to Noah after the great flood: “When the bow is in the clouds, I will see it and remember the everlasting covenant between me and every living creature of all flesh that is on the earth” (Gen. 9:16). I was always taught that the rainbow was a reminder to us of God’s promise. But God was actually saying that it’s a reminder to God never to bring such total devastation to the earth and humanity again. Because surely God must be tempted sometimes to just chalk us all up as a big mistake.

This might be one of those times. Such hatred and fear plague us, such grief assaults us.

The Orlando massacre was an all-purpose tragedy. If you want to hate somebody, it offered plenty of opportunity. If you want to hate Muslims, immigrants, LGBT folks, and/or the sort of people who hang out in bars, you were handed an easy target. For as many people as had their fury at “Islamic terrorists” rekindled, I fear there were just as many who thought Omar Mateen did a service to our country by eliminating a few dozen gay, Spanish-speaking nightclubbers.

We inhabit a time of seemingly unprecedented polarity and meanness. Civil discourse, tolerance, respect, and just plain old politeness seem to have fled from many corners. Fear rules in too many places and resides in too many hearts. There’s a lot of talk about putting up walls and shutting people out, about beefing up our protection and shoring up our security. Both political rhetoric and personal opinions too often these days drip with hatred and exclusion.

Three days after the killing spree, I woke up to an NPR news report about a two-year-old being snatched by an alligator and dragged into a lagoon at the edge of Orlando’s Disney World. And it struck me in my compounded sorrow teetering toward despair that this is a metaphor for life in the U.S. these days. One moment you’re a toddler delightfully playing at the edge of the Magic Kingdom, and the next you realize you’re in the furious and crushing jaws of a lethal power that defies comprehension. Innocence fleees when truth is revealed. And sometimes hope follows.

As I kept my eyes riveted on Friday’s rainbow, I began to picture all the rainbow signs and logos that have appeared across the country in solidarity with the victims of Orlando. The night after the tragedy, a sister standing under a rainbow flag at our candlelight vigil in Asheville looked over the crowd and proclaimed, “You are a beloved child of God. Nobody can take that away from you.”

I pray to live in a world where everyone believes that truth—about themselves and about every person on this planet we share. Where God’s covenant of promise and protection is acknowledged as being for all of us. A world without the bigotry that both nurtures self-hatred and erupts in senseless violence.

I learned on Monday morning that, while I was talking with Abby, a full rainbow spanned and embraced 50,000 people vigiling in Orlando on behalf of those murdered at The Pulse. Yes, Abby, the rainbow is solid enough for us to stand on.