The mother, with tears streaming down her cheeks, thrust her baby toward us. “Take him,” she cried in Spanish. “Take him to a place where there is no war.” 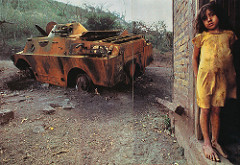 The year was 1983, and a U.S.-sponsored conflict was tearing Nicaragua apart. I was there as part of the first Witness for Peace team to set up a prayerful, protective, and nonviolent presence in that country’s war zones. We were on a bus from the tiny town of Jalapa, bumping over a rutted, isolated road back toward Managua, with bursts of mortar fire echoing around us.

When July 19 comes around each year, I think of Nicaragua. Two weeks after fireworks explode here from coast to coast to celebrate the success of the American Revolution, Nicaraguans mark the triumph of theirs. Thirty-seven years ago today, they overthrew the Somoza dynasty that had brought repression and ruination to their country for more than four decades.

Our government lost no time launching an effort, both covert and illegal, to undermine the political change that brought literacy, health care, and a measure of economic security to many Nicaraguans for the first time in their lives. The CIA began funding, training, and equipping counterrevolutionary forces called contras, most of whom had been part of Somoza’s brutal National Guard.

I think of that bus ride to Managua, of six-month-old Ricardo and the fierce love of his mother, who was willing to give him up to guarantee that he would have a future. If he survived the contra war, he would be thirty-three now. He probably has children of his own.

Today I remember again the faces of the mothers as they told of losing their children in the war. I could never forget the countless sad, heartrending stories. But I also treasure a gem of hope from our journey to Jalapa at the start of our visit.

As we headed toward the town tucked near the Honduran border, soldiers in the people’s militia stopped us at Ocotal, warning us that contras were attacking the road ahead. We slept on the floor of a church, which we shared that night with refugees—mostly women and children—who had fled their homes scattered throughout the mountains. That long night was filled with the sound of gunshots in the distance and the cry of frightened children up close.

We awoke before dawn and washed our faces in a rain barrel, ready to push on to Jalapa. The refugee women had risen even earlier. Firewood was stacked in a dome-shaped clay oven, and they were already slapping out tortillas when the sun made its appearance as a glint of orange above the mountains. 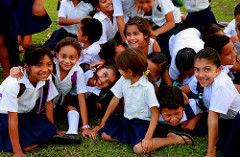 Those women served a communion of tortillas and coffee to us, affluent strangers from a country that was sponsoring a war against them. Unsure of when they would have another meal, they lived moment to moment, sharing all that they had and trusting that God would provide. It’s a way of life I hope Ricardo and his family embrace. Our world would be a far better place if we all did.