Yesterday the snow was like a carpet of diamonds.

I’ve always loved snow. We had plenty of it in my growing-up years in Pennsylvania. But that didn’t prepare me for four college winters in Maine. From October to March, cafeteria trays were our makeshift sleds for hurtling down the small mountain on the edge of our campus, and a pair of cross-country skis took me at night into the silence of the woods that surrounded it. Some days we had to walk through tunnels of snow to get to our classes. 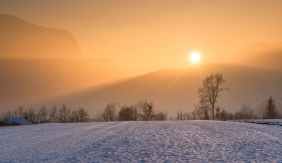 But I’ve never seen anything like yesterday. The morning temperature was 10 degrees, with wind chill below zero—unusual in these North Carolina mountains. The snow had fallen overnight in large crystals, and the effect was stunning: a mountainside sparkling with dazzling radiance, as if strewn with precious gems. Bundled up against the weather, I lingered at the scene until my toes began to go numb and I couldn’t resist the call of the fireplace, a warm afghan, and a mug of hot lemon-ginger tea at home.

On my walk this morning, I felt a twinge of disappointment and sadness. The temperature is up, and a bit of melt has shrunk the ice crystals. Although still beautiful, the snow didn’t take my breath away. I followed the tracks of a rabbit for a while through the pasture, and then the footprints of the gorgeous red fox that lives in an underground burrow above the pond. I noted the hieroglyphics left by a couple of wild turkeys by the creek and then headed into the forest, still in awe of the deep silence that drops on the world when it is blanketed in snow.

I was walking up to the final ridge near home when I spied today’s surprise gift. Tiny gleams of blue, green, and purple greeted me on the path up ahead. Sprinkled among them were larger glints of red, orange, and gold. The ice crystals were just the right sizes, and the sunlight was at just the right angle, to present this scattered, glistening rainbow.

I wish I could show you a picture of it. But the only cameras I own are the one in my brain and the one in my early-model, less-than-smart phone. It’s a conscious choice. I know myself well enough to realize that if I owned a real camera, I would spend much of my time trying to capture the perfect picture rather than living into the mystery and beauty of each moment as it comes. So instead I will say “Go and see for yourself.” Keep your eyes open to the magic that surrounds you.

Tomorrow marks the one-year anniversary of the current regime in Washington, and there’s plenty of justifiable outrage going around about the state of our nation. But we have endured, and resistance has sprung up everywhere. Two observations stay with me from my recent treks in the snow. First, I discovered that the most astounding and resplendent beauty comes from variety—different colors, sizes, shapes, angles, and efforts working together—to brighten the forest floor as well as the corners in our world where despair threatens to take up residence. Second, when I approached to look more closely at the rainbow, it disappeared from where I first saw it and moved out ahead of me. No matter where I stood, it was always a few feet closer to the sun. Always pointing a way forward, paving the path with the light of hope and the promise of change.

17 thoughts on “A Few Feet Closer to the Sun”