It’s intermission at a concert in downtown Asheville. I head toward the women’s restroom. A cop standing at the door is checking birth certificates, which those of us in North Carolina have begun carrying on any day that we think we might have to use a bathroom. 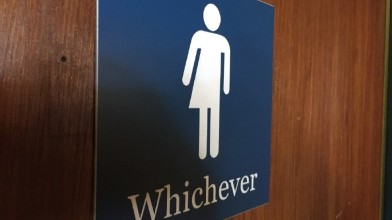 OK, I’m kidding. That didn’t happen. That couldn’t happen. House Bill 2, which is both malicious and discriminatory (see “Privacy Invasion,” posted on April 1), is also absurdly unenforceable. This week a spokeswoman for the Asheville Police Department told an NPR (National Public Radio) reporter that every officer on the force would have to be pulled off the streets and onto bathroom patrol to make such a law work. And they’ve been issued no guidelines about what to do if they actually catch people in the act of—God forbid—relieving themselves illegally.

Not to mention that a fair number of us would have to search long and hard to find our birth certificates. Or that, even without the “biological sex” check at the door, during intermission at any symphony concert, bluegrass jam, dramatic production, or sports event in Asheville, the line for the women’s restroom is already halfway to the Blue Ridge Parkway.    END_OF_DOCUMENT_TOKEN_TO_BE_REPLACED

I was a young associate editor at Sojourners magazine when Dan Berrigan sent a poem for a special issue sometime in the early 1980s. Accompanying it was a note that read “Here’s the poem—my first on a word processor. Seems a bit jumbled. Might have got a food processor by mistake.” He was not yet a friend, so I wasn’t familiar with the mischievous grin that likely spread across his face as he wrote it. 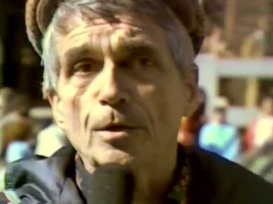 I had first learned of Dan, his brother Phil and sister-in-law Liz McAlister a decade before. I was a high school senior in Hershey, Pennsylvania—writing papers with such titles as “Stopping Communist Aggression in Vietnam” (well researched from a wide variety of issues of the Reader’s Digest)—while they were on trial thirteen miles away in Harrisburg for their opposition to the war.

I was a searching seminary student at Yale when I first heard Dan speak. It was the day before a Trident submarine, capable of creating multiple nuclear conflagrations more powerful than the one that had destroyed Hiroshima, was launched from the coast of Connecticut. That day Dan joined many others in a public act of resistance and was carted off to jail. I was just beginning to make connections between the gospel and peace and putting faith into action. END_OF_DOCUMENT_TOKEN_TO_BE_REPLACED