Three-year-old Enrique’s favorite toy—a plastic helmet with a dark face shield, emblazoned with the word “POLICE”—was parked on his head. As he toddled up to our burly, 6-foot-8 county sheriff, with his mother Rosita watching nervously, the irony just about did me in.

As I’ve mentioned here before, for three hours every week a group calling ourselves Mujeres Unidas en Fe (Women United in Faith) gathers at a nearby church. A dozen Spanish-speaking women and an equal number of us English speakers share Bible study, exchange language lessons, and enjoy a potluck lunch. Fear has been running high since executive orders coming out of the White House targeted North Carolina as a state for increased deportations (see “Family Emergency Plan,” posted 2/13/17). 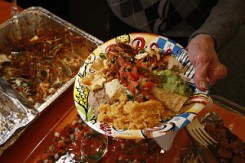 Understandably, when faced with such a terrifying threat, many people choose to lay low and keep to the shadows. But a few weeks ago Carmela announced over lunch, “I think the best way to keep from being sent back is to introduce ourselves to local law enforcement—let them see our children and get to know our families.” It seemed to me audacious and brave—and very frightening for my friends. END_OF_DOCUMENT_TOKEN_TO_BE_REPLACED

In October 1983, two dozen peace activists gathered in Philadelphia as war raged in Nicaragua. U.S.-backed forces known as contras were carrying out a campaign of terror and mayhem against the civilian population. A woman from North Carolina, who had led a church delegation to the embattled country three months before, reported that while she and her colleagues were there the mortar attacks, kidnappings, and massacres had temporarily ceased. What to do?

The answer was obvious. If the presence of U.S. citizens was enough to offer protection to Nicaraguans, we needed to figure out how to make that presence permanent. Someone voiced what I assumed all of us in the room were thinking: “You mean we’re going to ask people to risk their lives in a war zone for strangers—and make them pay to do it?” Exactly. 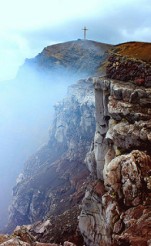 Thus was born Witness for Peace. It seemed clear to some of us that if we were going to issue such an invitation, we needed to be the first to go. Two months later, I headed to Nicaragua with the first team. In the meantime, U.S. military forces had invaded Grenada, and fear was running high among Nicaraguans that they would be next. Hearing their endless stories of anguish and loss, documenting contra atrocities, and standing in prayer with Nicaraguans at sites of attacks and massacres was life-changing for me. END_OF_DOCUMENT_TOKEN_TO_BE_REPLACED