[First posted in September 2011 on www.deepeningcommunity.ca]

I had to serpentine my way around a row of massive concrete barricades yesterday morning to get to the prison that houses Georgia’s death row. Four days before, on September 21, this line of defense was upstaged by an army of prison guards, sheriff’s deputies, state troopers, and riot police wearing blackened face shields and bearing high-powered rifles. A helicopter hovered overhead, and throughout the evening, police cruisers roared past the crowd, their lights flashing and sirens blaring. In all my years, I’d never seen such a massive display of force.

Just before 7 p.m., the scheduled hour of Troy Davis’s execution, the three hundred or so of us who had come to protest and pray outside the prison knelt and went silent. A bell rang the hour, and someone close to me began singing “Amazing Grace.” And then, at the other end of the line, a great cheer went up. A reprieve! Hope. It turned out to be only temporary.

Troy Davis was pronounced dead at 11:08 p.m. His last act on this earth was to ask for mercy for those who killed him. Moments later, the heavens opened up with a downpour of rain, a great, cosmic weeping for this gentle soul and a cleansing for all of us who are in need of showers of mercy. END_OF_DOCUMENT_TOKEN_TO_BE_REPLACED

[First posted in September 2013 on www.deepeningcommunity.ca]

Yesterday I marked another year of life on the planet. I received email birthday wishes from my dentist, a local seafood restaurant, and Bob, the guy who sold me a car two and a half years ago. 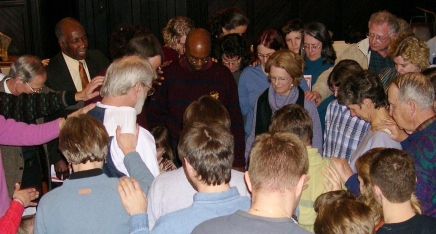 Now, my dentist is a very nice man and I’m grateful for him. But I see him every six months for about ten minutes, eight of which I have my mouth gaping wide open—which is hardly conducive to conversation. As for the seafood restaurant, I went with a friend about a year ago, and it will probably be another year before I can afford to go again.

Bob followed up his email message with a phone call, letting me know that he’s just sitting around his dealership waiting for me to buy another car. What he doesn’t seem to grasp (though I’ve told him more than once) is that my last car lasted thirteen years and 265,372 miles—and I’m expecting at least as much from this one. END_OF_DOCUMENT_TOKEN_TO_BE_REPLACED