Last Thursday in Montgomery, Alabama, the Equal Justice Initiative opened its museum dedicated to racial equality, at the heart of which is a profoundly powerful memorial to the more than 4,400 African-Americans who were lynched in this country between the Civil War and World War II. Three days later Melanie Morrison made a visit to Western North Carolina, reminding us that not all such acts of terrorism and brutality were carried out by white mobs under trees and the cover of darkness. Some were perpetrated in courtrooms in broad daylight. 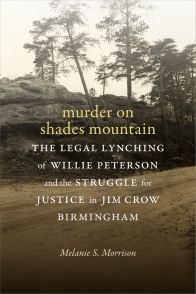 Melanie is the author of the newly released Murder on Shades Mountain: The Legal Lynching of Willie Peterson and the Struggle for Justice in Jim Crow Birmingham. She and I first met in the fall of 1976 when we were students at Yale Divinity School. She had just spent three and a half years at Koinonia Partners, an interracial community in Americus, Georgia, that suffered through Klan shootings and a boycott during its early years. Though I didn’t know it then, I was on my way to Sojourners Community. Conversations with Melanie about theology, racism, and intentional community contributed to my decision to leave seminary after my first year and make the move to inner-city Washington, DC. END_OF_DOCUMENT_TOKEN_TO_BE_REPLACED