I slept late yesterday morning. By the time I had emerged from the trees on my walk, the pasture was already blanketed in a sultry haze. My mind was preoccupied with an upcoming trip and the pile of tasks I need to accomplish before I can leave for a week. I plodded along, barely noticing what was around me. 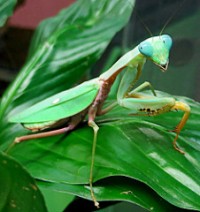 I felt a tiny prick above my right ankle and reached down reflexively to brush away a mosquito. This was some mosquito—huge and bright green, with a triangular face. When I tried to pry the odd creature away from my sock, it dug in the sharp spines on its forelegs and clung more fiercely. I was afraid it would leave behind a leg or two if I persisted, so I sat down in the grass and stared for a while at its curious face. END_OF_DOCUMENT_TOKEN_TO_BE_REPLACED

How to hold the heartbreak and the outrage? Hundreds of babies and toddlers, schoolchildren and teenagers wrenched from the embrace of their parents, many now sobbing inconsolably in immigrant detention centers—some unbelievably lost in the system. My friend Rosalinda, who used to earn just pennies an hour working in a U.S. factory on the Mexican border, who had a nephew who was murdered there, felt a need to tell me her own family’s story of escape from desperate poverty and rampant violence. She related a harrowing saga of vulnerable hiding places, grueling river and desert crossings, capture and release by Border Patrol agents, and a second attempt—all endured so that her children might have safety, enough food, and the chance to grow up. It is unimaginable to think that they might have been stolen from her here. 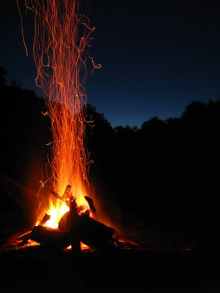 So we make phone calls, write letters, sign petitions, and take our candles to the park to pray and protest. We do it over and over because this is how we know to be human, to stay connected, to make sure that no victim is forgotten. Last month in the park, tears slipped down my cheeks as young American Jewish women slowly read out the names of the 60 unarmed Palestinian protesters who were massacred on May 14 in Gaza by Israeli troops, and then led us in a Hebrew Kaddish of mourning for them. In that extraordinary moment, I realized that there is deep within me a hunger for ritual, for gathering with others to remind ourselves of who we are, to keep ourselves grounded in hope. END_OF_DOCUMENT_TOKEN_TO_BE_REPLACED

“My little girl should be with his daddy,” said 30-year-old Basem Alkahlani, his voice cracking with emotion. Like so many Muslims, he was plunged into fear and uncertainty by the recent executive order banning travel to the U.S. from his native Yemen and six other majority-Muslim nations. His hope to reunite with his wife and two-year-old daughter has been put on hold indefinitely. Yesterday, more than 200 people huddled in the cold to hear his heart-breaking story. “You coming here picked me up,” Basem told us, “and I feel I am not alone.” 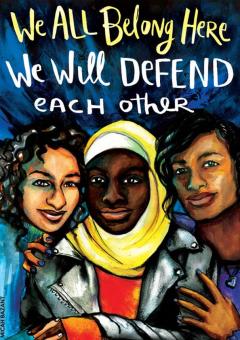 When my partner, Bill, had asked members of the Asheville Islamic Center how allies could show our support in this frightening and difficult time, they warmly invited the public to yesterday’s mid-day Jum’ah prayer. Grateful for the gift of a headscarf from a friend at Christmas, I rummaged through my closet and located my only long skirt and joined the other women at the back of the prayer room, sitting in a small sea of colorful hijabs, saris, and burqas. So many people showed up from local churches and synagogues to offer solidarity that we had to move the gathering that followed outside. After several more testimonies and heartfelt exchanges of thanks, we gratefully received hospitality in the form of donuts and plates of hot Pakistani curry.   END_OF_DOCUMENT_TOKEN_TO_BE_REPLACED