We arrived at my friend Sandra’s home, a small parade of women, each carrying a hollowed-out squash or pumpkin – in one case, a scooped-out sweet potato. When the first chill of autumn hits, I always think of the ancient Celtic tradition of Samhain, which was celebrated in late October to mark the transition from harvest to winter. A large bonfire burned in every village square. Each family arrived with a hollow winter vegetable, into which they placed an ember from the communal fire, likely the root of our tradition of making jack-o-lanterns. They carried these embers home to light their own hearth fires as winter began to close in. We were carrying on the beautiful ritual in our own style. 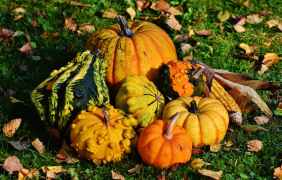 We gathered around a fire, poised between looming Samhain and just-finished Sukkot. The late-September Jewish festival recalls the forty years that the Jews spent wandering in the wilderness after being released from slavery in Egypt, when they lived in transitory shelters and ate manna that rained down from heaven. I first learned of Sukkot while I was in seminary in Atlanta in the 1990s, when for a week my Jewish neighbors hosted backyard parties in shelters they had temporarily created out of sheets of plywood and tree branches. END_OF_DOCUMENT_TOKEN_TO_BE_REPLACED